BY THE 1920s, time was running out for the virgin woods of Little Santeelah Creek. The Cherokee had long since been evicted from their ancestral home in the surrounding valleys. Wealthy plantation owners had developed large tracts of the best bottomlands before the Civil War, and while much of the land had been sold off to northern interests, small farmers and moonshiners still exploited whatever patches of mediocre soil or concealed hollows that they could get their hands on. 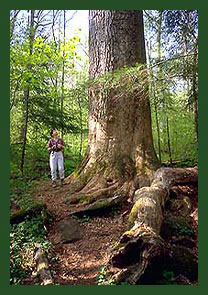 In 1915, the saws began singing in the neighboring valley of Slickrock Creek. The Babcock Land and Timber Company had recently purchased the land and begun its harvest of sugar maple, tulip and other valuable trees. A rail line ran along the Little Tennessee River into which the Slickrock flowed. The logs could be sent down the drainage and loaded onto flat cars for easy transport to the mills and the markets.

Within 7 years, more than half the valley had been logged out. Babcock began pruning the best specimens from the remaining stands, knowing that its time was limited. The damming of the Little Tennessee would soon flood the rail line, making transport of the logs uneconomical. The company began surveying the adjacent lands, searching for the next valley in which to bring its axes and lumbermen.

Little Santeelah lay just over a ridge to the east. But the lumbermen looked west, where Citico Creek drained a vast virgin forest. As they moved in that direction, the Little Santeelah gained a few more years. Citico occupied the saws for awhile, until a huge fire swept through thousands of acres and destroyed the centuries-old stands that had brought the timbermen into the valley. Once again, they moved on to another watershed. 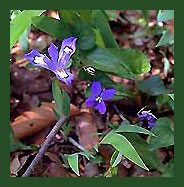 By the early thirties, the Little Santeelah forest was an isolated island in a sea of cleared lands. Inevitably it fell under the gaze of the lumbermen, but each time they moved into the valley, its huge yellow poplars and chestnuts filled them with awe. Some mysterious protection prevented them from swinging the axes. The land exchanged hands several times, each owner eager to gain the riches from felling the giant hardwoods that towered over the stream. One owner began constructing splash dams to float the trees out. But with the Depression casting a pall over the country, its money ran out before the first blade could bite into an unblemished trunk.

The Gennett Lumber Company had the last chance to fell the giants of the Little Santeelah. But whether from a lumberman's respect for nature's mightiest, or the financial hardship enveloping the country, or an unknown force diverting all encroachers, the blades never cut.

In 1935, anxious to find a suitable tribute for a fallen hero whose poem "Trees" had inspired millions, the Forest Service inaugurated the Little Santeelah as the Joyce Kilmer Memorial Forest. Nature's centuries-old masterpiece would be protected for generations into the future.

THE JOYCE KILMER MEMORIAL FOREST  is now the largest stand of old growth trees in the eastern United States. The 3,800 acre preserve commemorates Joyce Kilmer, a fallen World War I soldier and poet who was killed in action at the age of 31. His masterpiece poem testifies to the power of the remaining giants: "I think that I shall never see a poem lovely as a tree..." 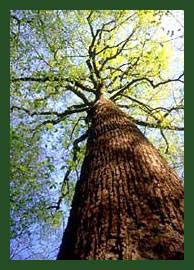 A figure-eight trail winds through the dark enchanted forest, magic for anyone who has never experienced a true forest primeval. The 2 mile path is soft underfoot, cushioned by the leaves dropped from the canopy towering overhead. In about half a mile, the trail comes to the center of the eight, where a plaque is laid in honor of the forest's namesake. Crossing Little Santeelah Creek, the trail continues on to the upper loop, entering the Poplar Grove.

The immensity of the trees strikes one first. These specimens are truly behemoths hundreds of years old. Poplars, hemlocks, chestnuts, and oaks stretch hundreds of feet toward the sky. An ancient's base may extend 20 feet around, stretching out ever further at ground level as it seeks a toehold to keep the tower upright. High overhead, a gangly set of branches is silhouetted against the sky in early spring, the leaves just beginning to bud out and filter the light down to the forest floor.

While the trees symbolize centuries of growth, the floor itself holds much of the fascination of the mature forest. Unlike lands recovering from recent cuts, this ground is open, not littered with second growth. The cycle of life is evident where young trees barely a child's height grow beside massive rotting timbers, their surfaces completely shrouded with the glossy green moss that is helping to break them down. In the dappled sunlight reaching the ground on an April morning, wildflowers are blossoming, tiny purple irises peeking through the deadfall, others of yellows, reds, and whites scattered beside the trail. 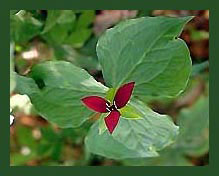 As one completes the upper loop of just under a mile, a bridge crosses to the north side of the Little Santeelah. Along the streambed, the forest floor closes into a massive rhododendron thicket. The creek tumbles over mossy rocks, the sound of flowing water breaking the stillness of a spring morning. In another half mile the trail winds back to its beginning.

The Joyce Kilmer Memorial Forest is part of the Nantahala National Forest.  It is located in western North Carolina near Robbinsville.