“AMERICANS AND YI both have culture,” the shaman greeted us. “Our culture ties us together.”

The grizzled old man squatted in a corner of his cabin facing the light shining through the door. The wrinkles around his cheeks and eyes reflected his 80 years as a spiritual leader in a village nestled in the shadow cast by the 18,000-foot Jade Dragon Snow Mountain. Xuehua was really four interconnected communities, all told a couple of hundred families of Yi, a small, historically rebellious minority that occupied the poor higher land in northwestern Yunnan.

We had been walking for about an hour on the second day of our trek along the Tea Horse Trail, an ancient route for moving horses and tea from India through Tibet and into southwestern China. Justin Zackey, a researcher in environmental development, was guiding my wife Diane and me through several of the villages he studies. He suggested we detour for a quick mid-morning visit with his friend.

“He will want us to stay the night,” Justin warned. “I will tell him we only have time for tea.” 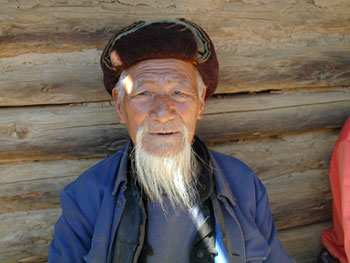 The shaman and his wife had seen us coming. He bellowed to someone in the fields as he ushered us into the main room of the wood house. Woven bamboo curtained off smaller rooms on each side. A fire blazed in the open hearth dug into the dirt floor. Diane and I were directed to the seat of honor, a short bed covered with a black pad of goat hair pressed into felt. Everyone else perched on wooden blocks. Sun reflected off the smoke escaping through the eaves.

The daughter whom the shaman had called joined us to serve tea. Meanwhile his wife scurried around to find more refreshments. We agreed to a simple snack, nothing elaborate. Shortly another woman came in, introduced as a daughter-in-law. She carried a large black chicken, wings flapping as it tried to escape mortal danger. As she raised a knife up to its throat, it quickly became clear that tea alone would not be a sufficient show of hospitality. We settled in for a long visit and a large meal.

As the women prepared the food, the shaman seated us on logs under the awning fronting the house. A scraggly white beard dirtied his chin. He had only a few molars left in the back of his mouth, drawing his lips into a permanent sneer. But his eyes twinkled with a remarkable expression of delight as he unwrapped a book, a scroll really, sheets of cotton bound at one end around a bamboo rod. 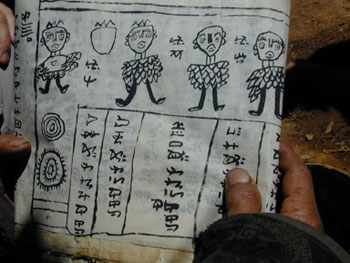 “The Yi are 10,000 years old,” he told us in Mandarin, with Justin translating. “10,000 years ago, we were nothing. We had no farming, no culture. Then we received this book and started our history.”

The shaman had written the book himself decades before, copied from material he said was as old as the Yi people themselves. During the Cultural Revolution, rumors reached the village of the Red Guard burning sacred writings. He loaded some of his books onto donkeys, and his brother carted them hundreds of kilometers into Burma for safekeeping. But the village could not spare enough animals, so he carried others into the mountains to bury under rocks.

“The Yi are the elder brother,” he continued. “We originated the culture, then handed it down to our middle brother, the Tibetans, and to our younger brother, the Han Chinese.”

He opened the book to a page with four figures sketched across the top, three stick men and a woman signified by a square on her breast. The left column presented drawings of the sun and the moon. Script covered the body of the page. “The writing has changed many times,” he noted, counting on his fingers each of the dynasties through which Yi script had evolved. “The book governs our life, when everything happens, our planting, our fertility rites, our festivals.”

The shaman was passing his learning on to his 18-year old grandson. One of his sons had also learned the art and was in high demand for spiritual advice and blessings among the villagers. Nonetheless, the assimilation of his culture into the outside world concerned the shaman more than anything. Four of his ten children had moved to Lijiang, the big city in these parts. One had become a minor government official, two others policemen. A television sat inside his door, tuned to an international soccer match. A basketball hoop stood outside on a court of rough packed dirt sloping sharply away from the post. The culture seemed strong sitting here under the mountain, but these signs heralded its fragility.

The women calling us in for lunch demonstrated first-hand the traditions endangered with the passing of generations. The shaman’s wife wore several layers of skirts, blouses and vests, all dark from faded dyes, smoke and dirt. Loops of brightly colored beads hanging from each side of her head brightened the outfit. But it was her headdress that evoked the long history of the Yi. A black scarf covered a wide mortarboard atop her brow and hung down to her shoulders. Centuries ago, the women were much smarter than the men. The men devised the mortarboard as a barrier between their women and the heavens, lowering their wives’ capacities to the men’s level. The younger women had abandoned this practice. While the daughter-in-law still dressed in traditional skirts, the daughter herself could have walked off the streets of Lijiang in her pullover, jeans and sneakers. 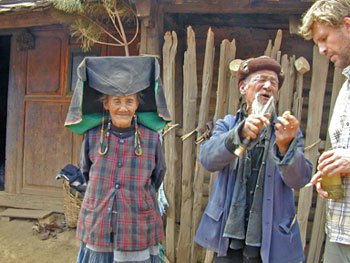 Lunch began with whole potatoes roasted in the coals. We peeled and ate them while the chicken boiled in a wok on the fire. When the fowl was ready, the daughter-inlaw ladled bony pieces into our bowls, along with a rich broth. More potatoes, rice and leafy vegetables in soup were laid out. Each dish was local fare, but putting them all together was a feast reserved for guests or festivals. Another daughter and two more sons with a grandchild in tow appeared to share in the unexpected bounty.

As the meal ended, the shaman sat in his corner examining the carcass of the chicken. He picked apart the skeleton, then hurried excitedly around the fire to show us the curve of the wishbone. “A good omen,” he promised. He needed more light to complete his prophecy so he carried the bones outside, throwing each of them to the ground as he finished inspecting. Finally, he pulled out his knife and scratched at the skull, looking for cracks. Finding none, he assured us, “You will encounter no contradictions or quarrels. Your spirits are protected.” Our appetites satisfied, we complimented the women, “Hao Chi,” “Good Eat,” and headed down our path of good fortune.