The Cartoonist versus the Machine

Four days before Halloween 1871, the New York sheriff carried a warrant to the Commissioner of Public Works, William Tweed.  Better known as Boss Tweed, the Commissioner was the Grand Sachem of Tammany Hall and head of the Tammany machine that ran the city.  He was waiting in his office to be arrested, along with gentlemen to back his one million dollar bail and ensure he didn’t spend a minute in jail.

The spoils garnered through Tammany’s corruption had been well-known for years.  But only since an auditor smuggled books to the New York Times had the staggering sums generated by the decade-long construction of the new New York County Courthouse behind City Hall been measured.  And it was those books that provided the hard evidence for the arrest of Tweed and his cronies.  According to the Times, expenditures on the courthouse had topped $13 million, against a value for the work done of $3 million.  The Times cited several examples of the corruption.  One lucky carpenter had earned twenty-eight grand for woodworking in a single court room.  A prince of a plasterer charged over a million for two months putting up walls and ceilings.  Expenses for carpeting suggested the material would cover City Hall Park three times over.

But numbers weren’t what turned the tide against Tweed and the Tammany Ring.  Years earlier, cartoonist Thomas Nast publishing in Harper’s Weekly had been lampooning the corruption of Tweed and his Tammany ring.  He as much as any numbers turned the city against him.  Said Tweed himself, “Stop them damn pictures. I don't care what the papers write about me. My constituents can't read. But, damn it, they can see the pictures.” 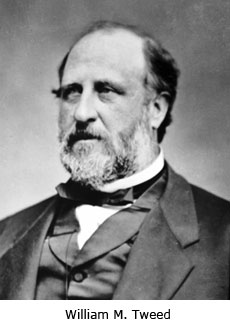 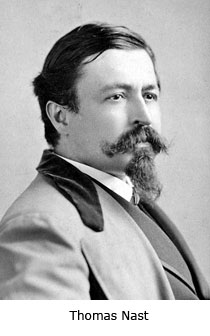 Said Tweed himself, “Stop them damn pictures. I don't care what the papers write about me. My constituents can't read. But, damn it, they can see the pictures.” 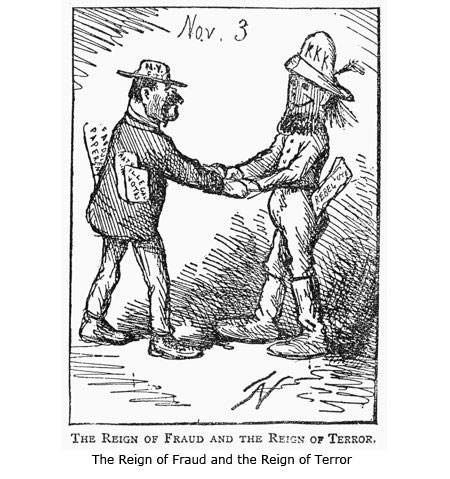 An early Nast cartoon tied Tammany Hall to the Ku Klux Klan as Democratic allies in the election of 1868. 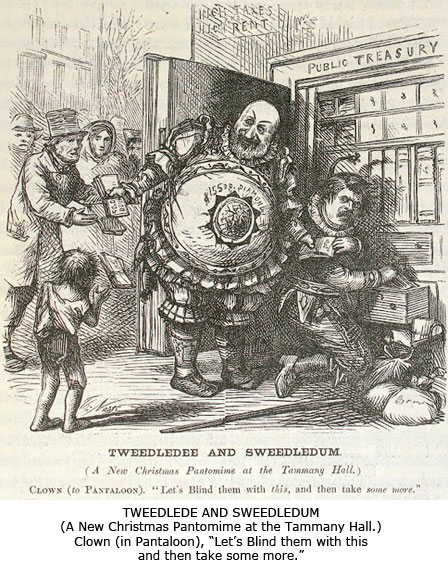 This cartoon from January 1871 features Tweed himself spreading some of the largesse around would enable him to steal more. 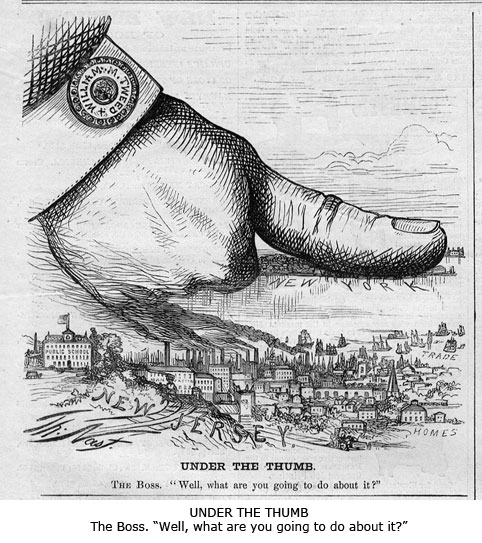 By June 1871, Tweed was getting cocky, asking his critics what they were going to do about him and his Tammany ring.