THE UNITY SAILED FROM AMSTERDAM IN 1623, first ship of the Dutch West India Company, Arien Jorise commanding.  As soon as she reached Manhattan Island, the party split.  Two families and six men headed for the Harford River to the east, another two families and eight men for the Delaware to the south.  Eight of the crew stayed behind to take possession of Manhattan while the Unity continued up the North River, what would one day be called the Hudson.

Some ways upstream, the eighteen families still aboard transferred to a lighter boat left by the Dutchmen who had traded on the river the year before.  They traveled again as far upriver as they had come until they landed at a spot on the west bank where a stream spilled into the main flow.  Here they would settle.  They built a small fort and huts of bark. 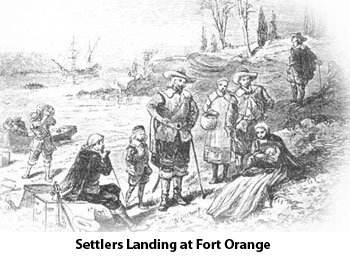 No sooner had they moved into their crude homes than the Indians came, the Mohicans who lived along the river, and the Mohawks.  The natives brought great presents of beaver and other pelts and told Commander Jorise of their desire that they might come and have a constant free trade.  And so they made a Covenant of Friendship with the new arrivals.

That’s the way Catalina Trico remembered her journey to her new home, a newlywed, not twenty years old.  By the time she looked back, she was over eighty.  The years or her age had fogged her memory.  The ship was more likely named the Nieu Nederlandt, not the Unity, and Cornelis Jacobsen May skippered her.  She had sailed on January 25, 1624.  She carried fewer people when she ventured up the Hudson.  Eight families plus ten or twelve men would plant the settlement to be called Fort Orange.  However garbled Catalina’s memory, Commander May had left Arien Jorise to govern Fort Orange when he sailed back downriver.  The Covenant of Friendship that Jorise concluded with the Mohicans and the Mohawks would lead to a prosperous start for the new community.

The Dutch had been laying the groundwork for this first settlement for more than a decade.  Henry Hudson had brought back word of the wonders of the Hudson Valley in 1609.  His expedition had aimed to discover a Northeast Passage to Asia, but ice had turned him west.  In September his ship the Half Moon entered the river that would bear his name.  The Dutchmen spent two weeks on the river, proceeding 44 leagues above its mouth.  Hudson sent a smaller boat several leagues further, past the confluence with a major river from the west that would be called the Mohawk.

Hudson and one of his officers, Robert Juet, sang the praises of the land in their journals.  The country was the finest for cultivation of any they had seen, abounding with trees of oak, walnut and chestnut, fruits of grape and pumpkin.  The river was filled with mullets, breames and barbils.  The River Indians along the upper stretches welcomed the Dutch ashore with song.  Within a couple of years, the maps would label these people the Mohicans.  When these Indians feared the visitors were afraid, they broke their arrows into pieces and threw them into the fire.  The chiefs gave the Dutchmen great stropes of beads, the belts of wampum with which the tribe preserved its memories.  They orated and motioned that all the country about them was at their command.  The people brought corn, tobacco and fruits to trade for beads, knives and hatchets.  And they brought furs of beaver and otter, eager to exchange them for trifles.

When news of the furs reached Amsterdam, it launched an intense competition.  France had shut foreigners out of the fur trade in her North American territories, nor had the Dutch penetrated the territories of the mid-Atlantic coast through which the English were gathering pelts.  But here was a no man’s land between the French and English.  The merchants of Amsterdam quickly stepped in to fill the void.  By May, 1611, the group of Arnout Vogels and brothers Leonart and Francoys Pelgrom had chartered the St. Pieter.  Cornelis Rijser skippered the St. Pieter’s voyage.  Hendrick Christiaensen and Ariaen Block went along as supercargoes to conduct the trade.  While the merchants’ instructions were intentionally oblique, “to carry on trade at places appointed by the supercargo,” the ship’s destination was evidently the Hudson.

The returns were sufficiently attractive to enlist additional merchants.  Hans Hunger and Lambert van Tweenhuysen joined the original trio to form the Van Tweenhuysen Company.  The company sent two more ships in 1612 and 1613 with Ariaen Block as skipper.

Block was not pleased in the spring of 1613 to see the Jonge Tobias under Thijs Volckertsz. Mossel arrive on the Hudson.  A rival group, the Hans Claesz. Company, had outfitted the ship.  The supercargo aboard, Hans Jorisz. Hontom, offered the natives double Block’s usual price for furs.  After considerable distrust and negotiation, the competitors agreed to split the skins, with two-thirds going to Block.  Both ships sailed for Amsterdam.  Jan Rodrigues, one of Mossel’s crew who had grown discontented with his lot aboard ship, decided to stay behind.  Block also left a few men, who began construction of a more permanent facility.  Fort Nassau rose on Castle Island a few leagues below the confluence with the Mohawk.  Here a smaller stream entered the Hudson, a stream that would enter history as Nordman’s Kill.

Both competition and luck turned for the worse the next year.  The Van Tweenhuysen Company sent two ships, the Tijger under Block and the Fortuyn under Hendrick Christiaensen.  The Hans Claesz. Company sent the Nachtegael under Mossel.  The skippers immediately entered a dispute over the services of Jan Rodriguez, the man Mossel had left behind.  They negotiated that problem, agreeing again to split the trade.  Then the Tijger burned and a disaffected portion of her crew mutinied and captured the Nachtegael.  Finally, two more competitors arrived, a second ship named the Fortuyn under Cornelis Jacobson May and backed by merchants from Hoorn and the Vos under Pieter Fransz and belonging to another Amsterdam rival.  Ultimately, the season ended with an agreement to split the ten thousand furs collected into quarters, one share for each company.  The two Fortuyns and the Vos sailed for home in June, 1614.

The destructiveness of the competition was obvious to everyone.  In March, 1614, the States General promulgated a new policy:  the discoverer of new countries would be given an exclusive patent for four voyages, to be undertaken over three years.  In October, it deemed the four companies on the Hudson in 1614 the “discoverers,” consolidated them into the New Netherland Company and granted them a patent until January 1, 1618. 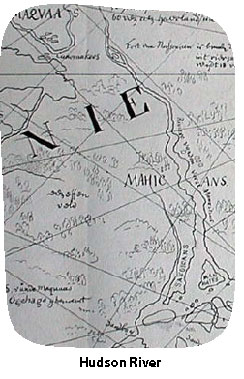 Hendrick Christiaensen skippered a New Netherland Company ship in 1615, with Jacques Eelkens along as supercargo. Having managed to eliminate the competition among themselves, the Dutch started worrying more over supply.  By now, the Dutch had learned the Mohicans controlled the territory for 75 miles along both sides of the upper Hudson.  In their initial trading, they relied on the Mohicans to collect furs, and as the demand increased, the Mohicans traveled north to secure more from related tribes speaking Algonquin languages similar to their own.  But eventually the more distant tribes realized they could gain higher prices by bringing their pelts to the Dutch directly.

At about this time, another tribe began bringing furs from as far as sixty leagues in the interior to the west, a tribe whose language was completely different from the Algonquin tongues.  The Mohawks were a belligerent lot, frequently selling everything, then returning thirty or forty strong to retract the bargain and demand better terms.

The animosity between the Mohicans and the Mohawks was clear.  Nonetheless the Dutch persevered in their contacts with the tribe from the west.  The furs they brought were excellent and the Dutch demand outstripped the purely local supply.  The Dutchmen encouraged the Mohawks to come to Fort Nassau, though it lay within Mohican territory on land that tribe had granted.  Three Dutchmen traveled with the Mohawks to explore their lands.  To avoid confrontations, the Mohicans began drifting gradually to the eastern side of the Hudson.

In 1615, Hendrick Christiaensen sailed for Amsterdam and left his supercargo Jacques Eelkens in command at Fort Nassau.  Eelkens evidently decided he needed to take some action to keep the rising tensions in check while maintaining the supply of furs from the diverse tribes.  The Dutch records are silent on precisely how he orchestrated events.  But the indirect evidence - the timing of his tenure and the location of Fort Nassau combined with the traditions of the participating Indians - indicates he brought the Mohicans and the Mohawks together on the banks of Nordman’s Kill.  There they forged the original Covenant Chain, an agreement by the three parties to permit a free trade in furs on the banks of the upper Hudson.  Nine years later, Catalina Trico was witnessing a second gathering, watching the Fort Orange commander Arien Jorise renew the Covenant of Friendship with the Mohicans and the Mohawks as the Hollanders established a permanent colony, New Netherland.

And so the settlement of Fort Orange prospered.  Before the ship that brought Catalina sailed away, the grain sowed in the fields offered by the Mohicans reached as high as a man.  The gardens had grown green and a mill was turning on Nordman’s Kill.  Commander May filled his ship with 500 otter skins and 1500 beaver.  By the end of 1624, he was selling his cargo in Amsterdam for 28,000 guilders.  Before Christmas, the yacht Maeckereel arrived in New Netherland, bringing Daniel van Krieckebeeck to take over the command of Fort Orange.  Three more ships followed in 1625 bringing cattle, horses, hogs, and sheep, plus equipment with which to build a dairy.  And forty-five more people came to New Netherland, six families and several freemen.

Catalina Trico and her husband Joris Rapalje had a special reason to celebrate.  Their daughter Sarah was born in June, the first Dutch child to open her eyes in North America.

Indeed if Catalina felt trepidation living in an uncharted wilderness surrounded by savages, she didn’t mention it when she looked back sixty years later.  The Covenant of Friendship Jorise had renewed upon the settlers’ arrival endured.  The Indians daily brought great multitudes of beaver, she remembered, and they were all as quiet as lambs and came and traded with all the freedom imaginable.

But Catalina’s memory was fogged.